OPENING: DEAR SANTA — in which four eager kids write, sign, seal and stamp their dreams for the season, setting up the vocal and personality "types" that will be carried through the entire show. For now, they are filled with faith and optimism.

BRING MUMMY — a female solo in which a dainty little girl named June asks Santa for a special gift for her mother. It's a Shirley Temple-style turn, and she's not afraid to tap.

THE ONLY THING I WANT IN THE WORLD — a male solo with two backup girls, in which a little boy named Ben — raised on disco, pop and Motown hits of the '70s — longs for an action figure all his own. Watch out, Barbie.

WINTER WONDERING 1 — a soloist and three carolers ponder the Big Questions associated with the season; they appear four times throughout the show.

NAUGHTY/NICE — four kids brightly reveal their grand acts of naughtiness, bordering on evil, but insist that — underneath — really they're nice.

WINTER WONDERING 2 — a soloist and three carolers return to ask more "questions in the snow."

WISH FOR A DADDY — a female solo, in the style of a torch song, which explores the feelings of a little girl who has been reared in Greenwich Village and exposed to one too many show tunes. She needs a little less Christmas, right this very minute.

DON'T BRING THE REINDEER 'ROUND — a male and female duet expressing the wishes of a veddy, veddy, upper, upper-class British brother and sister named Noel and Gertie.

CANCELING CHRISTMAS — four kids explain why Santa should avoid their neck of the woods this year; a mix of song and confessional monologue that conjures everything that makes the season merry and bright, including mob riot, anti-Semitism, religious fanaticism and broken marriage.

THE BALLAD OF THE EASY-BAKE OVEN — a menacing German girl who is addicted to American baked goods hungers for treats in a turn that makes her gluttony seem Weill — or, rather, vile.

SIBLING DUET — a brother and sister, Wicky and Thuthee, plagued by juvenile speech impediments, sing a counterpoint duet that reveals them to be at cross purposes.

AN ELEEMOSYNARY CHRISTMAS — a male solo with two backup singers, in a folk-pop style, in which a boy versed in both Dickens and the Scriptures asks Santa to end suffering around the world.

WINTER WONDERING 3 — a soloist and three carolers return to wonder as they wander.

TRUNK SONG — four disappointed kids revisit the crap gifts Santa brought in years past and beg him to learn from his mistakes.

LULLABY — taking a cue from how her mother raised her, a girl with motherhood pangs shares her hope for a dolly with a gentle waltz.

SHOW STOPPER — a male solo in which a boy actor with delusions of showbiz grandeur invites Santa to his school Christmas pageant, in which he stars in the pivotal role: Wise Man No. 3.

WINTER WONDERING 4 — a soloist and three carolers complete their pondering, realizing the questions (not the answers) keep hope alive (until it's snuffed out).

A spoken sequence called "THE LAST LETTER" offers four monologues which note the painful moment each of the four kids first realized that Santa might not be real. This sequence of transition is both personal and theatrical: They transform into adults and step into the final number.

FINALE: PART OF ME — the four, all grown up and dressed in urban black, ruefully reflect on their bitter memories of past holidays; the act of remembering somehow allows them to reach for a brighter future — reconnecting, on Christmas Eve, no less, with something innocent and optimistic again.

The cast of four includes TWO MEN (tenor and baritone) and TWO WOMEN (alto and soprano) playing a population of about 20 characters (delineated in the list of Musical Numbers). The authors seek multicultural performers, and suggest that the actors have some maturity — people in their thirties/forties playing kids helps bump up the comedy, and serves the end of the show (when the characters are adults).

WISH FOR A DADDY 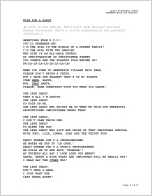 THE BALLAD OF THE EASY-BAKE OVEN 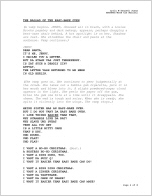 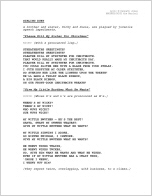 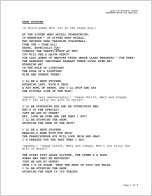 During its development, NAUGHTY/NICE was seen in two special Manhattan concerts presented in association with (and benefiting) ASTEP/Artists Striving to End Poverty, which is run by Broadway music director Mary-Mitchell Campbell. For those presentations — one at The Players Theatre in Greenwich Village and the other at Ars Nova in midtown west — solo and duet songs were assigned to guest stars while the group numbers were performed by a core foursome. Music director and arranger Lynne Shankel later used one of the solo songs, "Wish for a Daddy," to include in her annual popular New York City Christmas ASTEP benefit concert at venues throughout the city. Lynne's frisky arrangement was also recorded on a Sh‑K‑Boom studio album of the concert. Here's Sally Wilfert, one of our original artists, wowing the crowd at Joe's Pub with Lynne's charts of the torchy number. Learn more about ASTEP at asteponline.org.